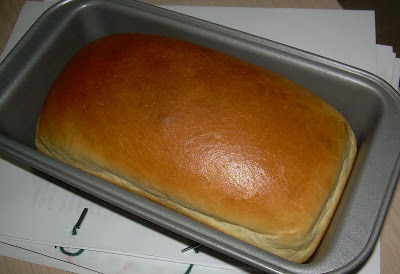 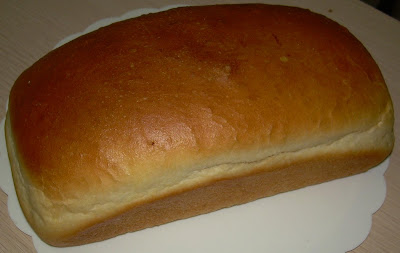 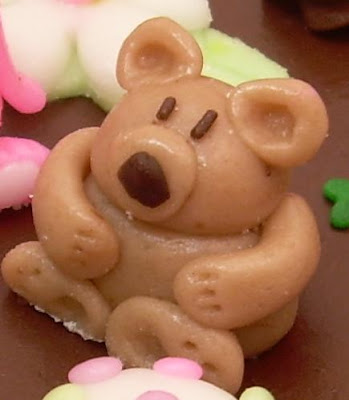 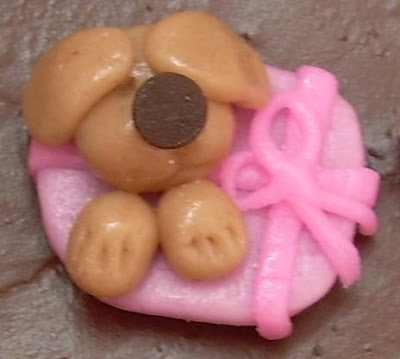 Last night got a call from my hubby's friend, Sabrina. She ordered a 2kg moist chocolate chiffon cake like I did a few months back. Huhu... Trouble was, when I baked the cakes and layed it on top of the other, it was to big to fit into the cake box. So I had to call and minta izin to divide it into two cakes. I made a Blackforrest Cake and the other moist chocolate chiffon with ganache and decorated it with fondant animals.
I think I'm getting the hand of shaping my mini-animals but it was a tricky job, doing it without the right tools. In the end I had to use a lidi to shape the mouths, ears, and other small parts of the body. Actually, they turned out pretty nice, although rather smudgy (fondant are rather sticky when you handle it too long in your hands).
Here's a close-up of the cakes I made: 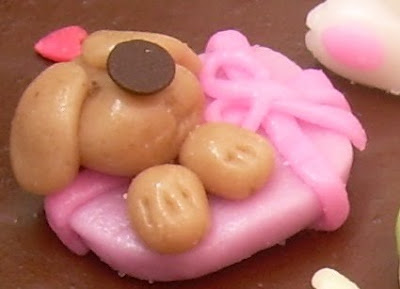 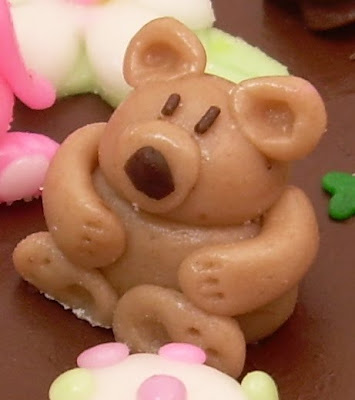 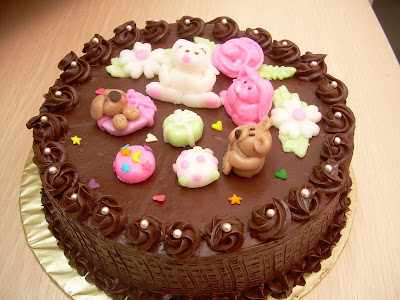 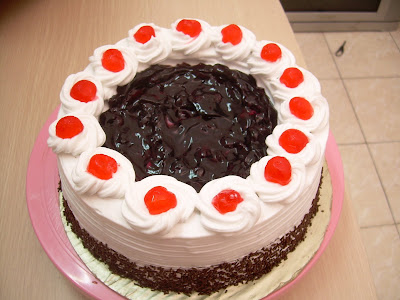 Last weekend (I think) I managed to bake some roti sosej @ sausage bread for breakfast. I thought, why not make it around midnight when lil' Taufiq's asleep? So I hitched up my sleeves and got rolling. I started about 10.30-ish pm that night, thinking 'Sempat ni, perap 1 jam mesti dah tidur dah Taufiq' and cluelessly continued my expedition with the hopes that everything will go according to plan.

So I abandoned my mission by putting a cloth over the dough, left it in the warm oven, and hoped for the best, with the wishful thinking that Taufiq will be fast asleep in less than an hour. As it was, a wishful thinking on my part. The dough rose beautifully but dangerously close of collasping back into itself after being left for an hour and a half. I managed to save what was left of the yeast and made it into several round balls, then let if proof for the second time. Right on cue Taufiq started merengek and called for me, and resolutely, I left the dough for another hour. Huhu.. After putting him back to sleep, I made some bread rolls and left them to proof for the third time, for 30minits. They didn't quite proof like the other breads I made. 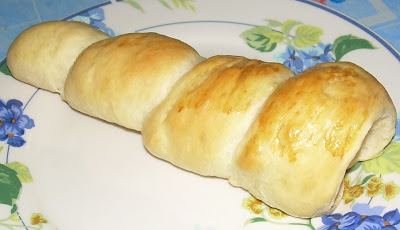 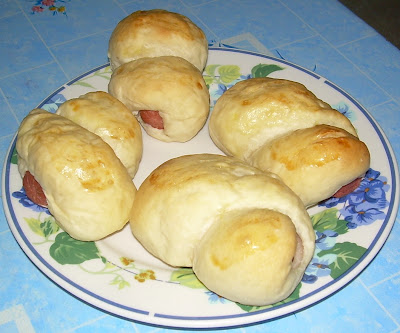 The ol' non-working momma's been having fun in the kitchen for a few days now. Muahaha...

Baked a Moist Chocolate Chiffon cake yesterday but didn't have time to get it decorated. Huhu... Only today I had the 'free' time to go sit and play around with my buttercream. And it's not always I get to handle buttercream. For one thing it's a messy job washing the utensils after making it. And for another, I haven't found THE ONE buttercream that suits my liking. That's one of the reasons why I haven't done any 'promosi' for cakes that uses buttercream. Huhuhu... (Tak suka buttercream yang terlampau manis).

As it didn't have too many eggs in it, I didn't have much problem in beating the egg whites into fluffy clouds (my stand mixer's too small, that's why I avoid making cakes that uses 6 egg whites, unless I halved the recipe.) Taste-wise, I'll stick to the this Japanese Souffle Cheesecake next time. 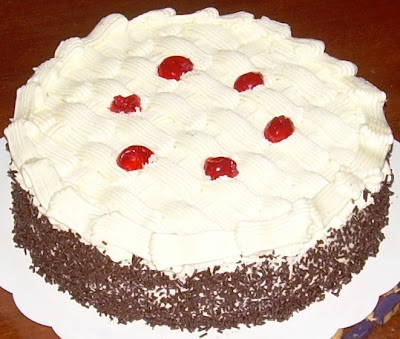 In case you're wondering, here's the recipe for the buttercream I used. It uses egg whites, so for those who are health-concious people, better use meringue powder or Omega-3 eggs. The bacteria gets killed when we pour in the hot syrup while whisking the eggs whites, so I don't think there's any problem there. It keeps up to two weeks in the fridge, months in the freezer, when stored in an-air tight container. Though I doubt the cake will last that long if a lot of people are eating it :p

Note: Ku guna 1/3 bahagian butter, 1/3 bahagian shortening, 1/3 bahagian krimwell@cremello. And I added more powdered sugar and 1tsp vanilla essence at the end to sweeten it more. Rasa seakan buttercream kat kedai kek, but then, I never really like buttercream even from the shops! :p You can use this as a frosting, icing cakes, swiss rolls, the likes. I added a bit of chocolate emulco to make the frosting in the middle of the cake.

This time I tried a recipe from Mamafami's Fotopages called Soft Butter Buns. My comment? Very soft, gebus and goes well for making sweet buns, mini pizzas, mini cheese bread and the likes. The only thing was the dough is kinda soft to handle by hand so you might want to use a stand mixer for this. The first time I did this (it was a while ago) I did it by hand, and my, was it sticky :P The second time (last night) I tried using my mixer and it turned out very stretchy (kinda like a webbyskin- dough when stretched by hand) and just right for getting a good soft bread/bun. 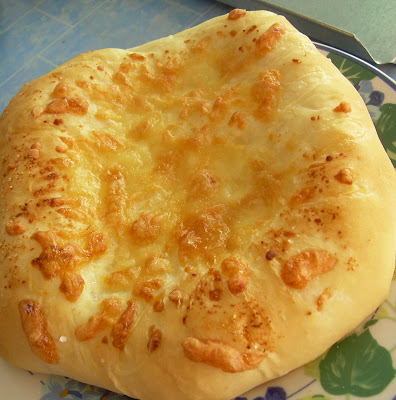 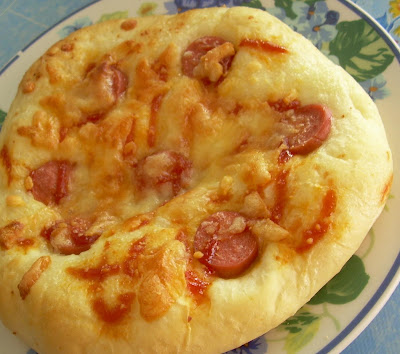 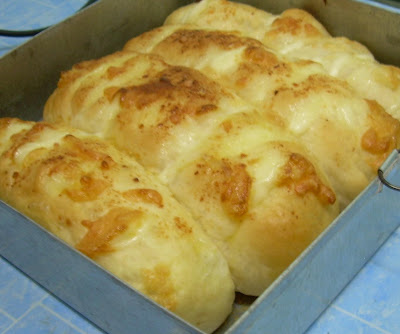 Note: I made mini pizzas, mini cheese buns dan cheese rolls. The cheese buns I used mozzarella cheese and serbuk parmesan. Seems like the serbuk parmesan doesn't stand too well in a hot oven and got pretty brown before the bread. So I guess next time I'll hold the parmesan cheese. And p'bably I'll use custard and pipe it on the cheese buns so that'll stay moist and soft, with a squirt of mayonnaise and mozzarella cheese on top. I don't quite get the hang of it making the cheese bun moist like the sell in the bakery shop. I wonder how they do it? I brushed using water before baking but that didn't seem to do the job. Hmmmm... More research I guess. 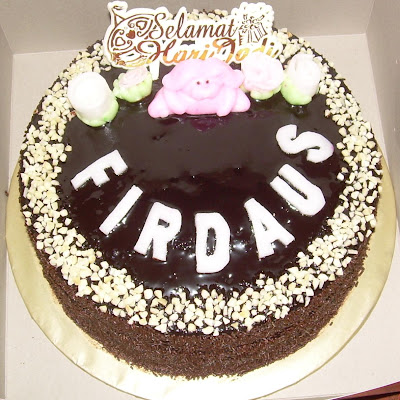 Happy Birthday & Thank You For Your Orders

I just want to say a (late) Happy Birthday and Thank You to both my hubby's friends, Wilson and Dympna, for ordering a kilo Choc Moist Cake each. Huhu.. Sorry, been a bit behind in my blog-updating these days.
Anyway, here's a sneak peek of the cakes I made. I've been trying to make decos using fondant (homemade, if I may say so myself) and find it to be challenging, if not, rather fun. OK, so my lamb turned into a puppy and my rabbit turned into a (bear?) but then it's my first time alright? :P 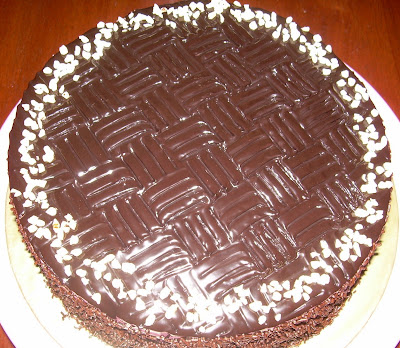 Wilson's cake with a bit of almond nibs around the cake 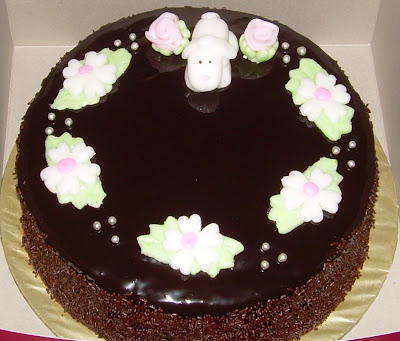 Dympna's cake - a bit of fondant goes a loooong way...

Huhuhu...
I've been meaning to try this recipe using nasi or rice for making bread. Mmm.. Tasted very unique (lemak dan terasa nasinya :p ) but on the whole, it was very unique and a great way to use leftover rice :P
The texture after baking was soft but as it cooled down a little, it went a little hard-ish with tiny lumps of unblended rice in it. Hmmm.. Must be because I used cold rice from the fridge (couldn't wait for it to thaw) but I'll definitely will try this again, using warm rice. And absent-mindedly, I forgot to put in the salt which explained why it tasted a LOT like plain ol' nasi. Huhuhu... Padan muka gue :P Cuai sangat. Huahaha.. 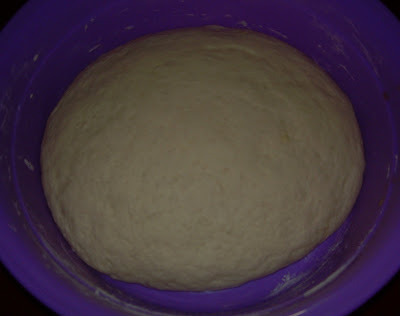 The Rising of The Dough 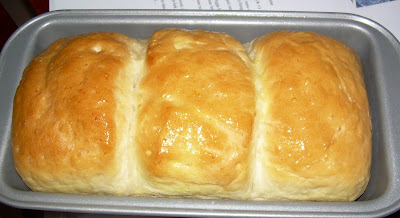 Out of the oven [tangkring]

Soft on the inside [can you see the tiny rice? Harhar..]
One thing I need to remember - get myself a serated knife. It just won't do cutting slices of bread using a regular knife. You'll just find yourself with a small mountain of breadcrumbs. Also, please wait for it to cool down a bit before slicing it (unlike yours trully :p )
N/B: Darn, I really got to get a taller loaf tin. The current one's just too short to make a decent-size sandwich bread. For 200g-250g of flour used, the current one's ok (it doesn't overflow) but for 500g of flour used, a taller loaf tin is needed. Better still, the one with a lid will give a block-shaped bread like in the supermarkets. Hmmm... Gotta go survey that bakery shop next time. Huahaha... Musti mahal ek? 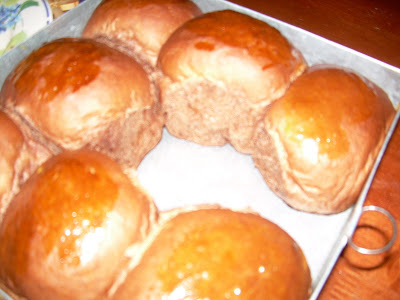 A bit blurred, you say? Heck, I'm a housewife, not a photographer :P 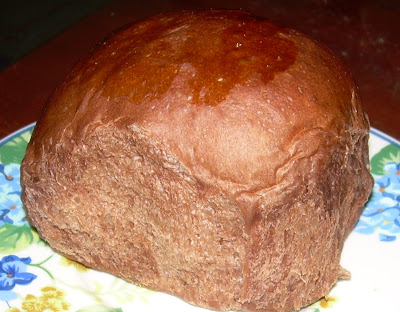 Choc bun- excellently soft and chewy, just like from a bakeryshop :p 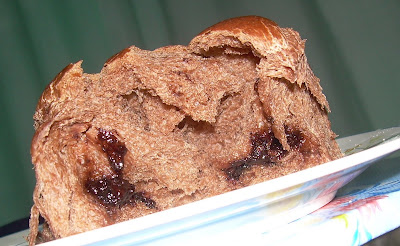 A picture paints a thousand words. Need I say more?

One thing that makes me smile from ear to ear. This is one time I'm trully satisfied with the outcome of my breads@buns. Even hubby couldn't believe his eyes/mouth/fingers when he saw/tasted/touched the buns. 'Macam beli kat kedai', he said.

Zack
Malaysia
Me? Just a regular old non-working mum to a not-so-lil' 10-year old son, a newborn baby and a well-beloved baby girl (may Allah bless her soul), and wife to an aquarium-Anno1777-Forex-camera-car-motorcycle-loving husband. Lifetime ambition? Trying to make sense behind the scientific functions, facts and reasons for each and every ingredients used in my cakes/breads/cookies :P I ain't no Einstein but I do love to explore and share what I've learned so that others can benefit from my baking ;p Cheerio!

Baking isn't just about following a recipe. It's also about finding the reasons behind the facts. Be brave to experiment, even if the percentage of success isn't high. Always learn from past mistakes and never give up- Zack

Please give credit where credit is due as a show of courtesy to the original owners so that they might at least feel appreciated for their hard work. Or at least put a backlink to the original recipe, it's the least we can do as a polite and civilised citizen. TQ~
BE FOREWARNED, PLAGIARISM OR INFRINGEMENT OF (INFORMATION, PHOTOS OR CONTENT) ARE SUBJECTED UNDER THE MALAYSIAN CYBER LAWS: "COMMUNICATION AND MULTIMEDIA ACT 1998", "COMPUTER CRIMES ACT 1997", AND "COPYRIGHT ACT 1987" (Akta Komunikasi dan Multimedia 1998, Akta Jenayah Komputer 1997 dan Akta Hakcipta 1987). And yes, we bloggers are bound by the laws.

Get this Recent Comments Widget